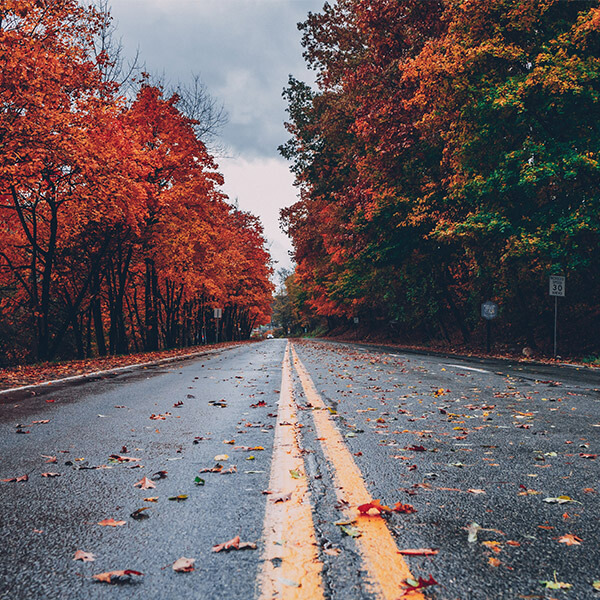 As the seasons change so do our tips for truckers. Fall, as beautiful a season as it is, can be tricky to deal with when it comes to safety on the road, so we thought we should share a bit of wisdom and some tips to prepare for the next haul.

Doing some research before you go on the road is always a good idea, but with fickle fall weather, it’s absolutely a must.

Research the area you’re driving through

Doing some research before you go on the road is always a good idea, but with fickle fall weather, it’s absolutely a must. The U.S. is a huge country and the weather conditions can vary drastically from one state to another, so it’s really helpful when you know what’s waiting for you along the way.

When you know which states you will be passing through you can make sure you have the right equipment. October in California is still pretty hot and drivers in Texas probably don’t ever have to worry about black ice, but it might be snowing in North Dakota at the same time.

Falling leaves might be beautiful, but did you know they are also a road hazard?

First of all, leaves can obscure lines on the road, as well as highway dividers, turn lanes, and other markings on the road. More importantly, they can hide patches of ice and potholes on the road. This is especially dangerous if you are not familiar with a particular road or route.

Second of all, leaves can be pretty slick, especially when combined with rain. That’s why it’s always better to slow down if you see a bunch of leaves on the road and try to go around them if it’s possible. Also, you could call highway patrol and ask them if they could clean up the leaves, just as a courtesy to other drivers.

Watch out for Bambi and friends

As fall sets in and scorching summer temperatures drop, wildlife becomes increasingly more active and can disrupt traffic if drivers aren’t careful. Deer tend to be active during dawn and dusk, so drivers should be especially alert during these times. Driving during these times is hard as it is, but with an added danger of a deer or moose darting in front of your car, it’s an especially tricky time.

It’s very important to pay attention to deer crossing signs and not to take it lightly. It’s much safer to drive a bit slower in areas where wildlife is more active than to have to deal with the consequences later.

If you do see an animal on the road, it’s unfortunately much safer to try to slow down instead of trying to avoid the animal by swerving. Although this does increase the chances of the animal being hurt, it’s still better to take those chances than to potentially cause your truck to overturn or hit other vehicles on the road and endanger multiple lives.

Be extra careful during dawn and dusk

As we’ve mentioned earlier, driving during dusk and dawn is more dangerous and harder on the eyes than driving during mid-day or at night – it’s just how our eyes were designed – so it’s extremely important to be careful during those times. As seasons change from summer to fall, days start becoming increasingly shorter and drivers are forced to spend more time driving during dawn and dusk.

Due to visual impairment, it’s much easier to miss signs and much harder to notice wildlife on the road, so it’s very important that you make sure all your lights are working properly on your truck.

Rain isn’t exclusively a fall thing, but there is an increase in rainfall during the fall months, so a bit of extra caution is a smart move.

Rain can cause several different problems for drivers:

During the fall season, temperatures tend to vary a lot during the course of the day. Mornings and nights can be pretty cold, sometimes cold enough for frost to cover your windshield and black ice to form on the roads.

Not only does ice pose a threat to drivers, but it can also affect their transport schedule by causing a delay. During the colder months, drivers should take into account the extra time needed before the trip to defrost their windshields and to double-check all of their equipment. Doing some research before the actual trip will help you decide what additional equipment you should bring.

Holidays are just about here and they already have an impact on the trucking industry. Since shops are stocking up on goods for the winter, there is usually an increase of rookie drivers as trucking companies try to meet demands from clients all over the country. Newbie drivers are definitely less skilled than their more seasoned colleagues, so it’s a good idea to keep that in mind when going on the road during this season.

Roads are also full of people visiting families and friends over the holidays, so truck drivers have to take that into account while on the road. Most people in traffic have never driven a truck and don’t really know what are the blind spots on a semi.

Fall is a beautiful season, but it definitely isn’t the easiest time of year to drive. Drivers should keep in mind that they need to be extra careful during fall months, but with a bit of preparation, most accidents can be avoided.

We like to regard our company as a family business because this is what we are: taking care of and supporting our people. We like to think that great results and excellence are the products of team spirit, tight cooperation, and straightforward communication. Therefore, we do care about every single member of our team, since the team goal is the goal of all its members individually.